JUST $6 CAN PROVIDE A BIBLE FOR A PERSECUTED BELIEVER. GIVE NOW. 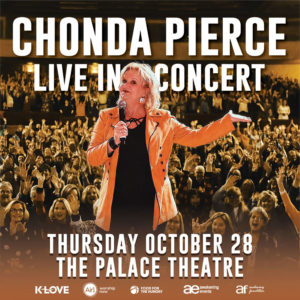 Thank you for your continued patience as we have worked to reschedule the CHONDA PIERCE Tour date in Greensburg, PA. We are happy to inform you that a new date has been secured.

The new date is October 28, 2021. There is no need to do anything at this time.   Please retain your current tickets as they WILL be honored at the new date.  If you cannot attend the newly scheduled date, you may request a refund through December 4, 2020 at your original point of purchase.  Please allow several days to receive the refund.

Thank you so much for your continued patience and understanding during these difficult times. We can’t wait to see you!

If you purchased your tickets through The Palace Theatre Box Office and are unable to attend the newly scheduled date, please contact the Box Office by email at [email protected] or by phone at 724-836-8000 prior to December 4, 2020. The Box Office is open Monday – Friday from 9 AM to 5 PM. Walk-in service is not available at this time.

Emmy® -nominated and best-selling comedian Chonda Pierce or “the country comic” as Billboard Magazine dubbed her, has been making audiences laugh for more than two decades with her winning combination of fierce wit and southern charm. Pierce is fresh off an incredible year after debuting her movie “Chonda Pierce: Laughing In The Dark,” to rave reviews from audiences and critics alike. The limited engagement documentary-style film was so well received that it was brought back for a very special encore performance and in total was viewed by nearly 100,000 people over the course of just two nights.

A stand-up comedian, television hostess, author and now actress, Pierce has channeled her life experiences into positivity, bringing laughter to audiences around the country. As the RIAA’s best-selling female comedian, her hilarious take on life is easily relatable as she publicly opens up to her listeners about times of darkness and depression in her own life, drawing humor and good from every situation. In October 2015, Pierce took her humor to the big screen with her first film “Chonda Pierce: Laughing In The Dark,” based on her personal struggle to overcome depression. The film is a behind-the-scenes journal chronicling Pierce’s downward spiral dealing with the devastating loss of her mother, an estranged daughter and the tragedy of her husband’s battle with alcoholism and subsequent death, all over the course of three years. Yet she remarkably makes her way through the adversity, heart-wrenching loss and her own depression with the gift of humor! Pierce made the film in hopes it would serve as a vehicle to inspire others who may be hitting points of darkness and depression in their lives.

“Chonda Pierce: Laughing In The Dark” opened October 27, 2015 at 500 theaters throughout the country for a one-night special event and was so incredibly popular, it returned to nearly 800 theatres for an additional one-night encore showing. The film topped charts and competed with some of the year’s biggest films. The DVD and digital versions will debut on April 5, 2016 and will be available nationwide.

Pierce got her start working at Opryland Theme Park in Nashville where she performed as “Grand Ole Opry” star Minnie Pearl. Pierce recalls being a terrible dancer and being told by her boss to “find a new talent.” In order to keep her job, she memorized three pages of jokes from Grinders Switch, TN and went on to impersonate Minnie Pearl for six years. While Pierce enjoyed singing and dancing, it was at this time that she truly fell in love with her craft. After deciding to pursue comedy fulltime, she recorded “Second Row, Piano Side,” a collection drawing material from her childhood growing up as the daughter of a preacher in South Carolina. Pierce’s material resonated with people from all walks of life, and she credits her southern upbringing both for her warped sense of humor and her solid roots.

From there, Pierce turned her gift of storytelling into a successful comedic career, selling more comic albums than any other female comedian. In addition to her 10 successful albums to date, she has also authored eight books, most recently “Laughing In The Dark” (Simon & Schuster/Howard), the inspiration for her upcoming film, and appears at venues big and small throughout the United States making audiences laugh with her ability to find the positivity in any situation.

Pierce received five Daytime Emmy® nominations for her work co-hosting talk show “Aspiring Women” on the Total Living Network and her first television special, “This Ain’t Prettyville!” on CMT (Country Music Television). She is ranked amongst Pollstar.com’s top-selling live performers and five of her DVD’s have been certified Gold by the RIAA, signifying sales of more than 50,000 units, and three have been certified Platinum, signifying sales of more than 100,000 units.

In addition to her accolades, Pierce is a frequent guest on famed “Grand Ole Opry” and has served as host of the Inspirational Country Music Awards and Christian Music Hall of Fame Awards and also co-hosted the GMA Dove Awards in 2012. She has also appeared on “Entertainment Tonight,” “The View,” “Fox News Channel,” “Wanda Sykes,” and her comedy is regularly featured on XM and Sirius satellite radio. Variety raved about her ability to draw audiences for an encore performance for “Chonda Pierce: Laughing in the Dark.”

In addition to her comedic work, Pierce has used her success to help others, and in 2006 founded Branches Recovery Center, which offers counseling and treatment to those with depression, anxiety, addiction, regardless of their ability to pay. She has also raised several million dollars for international relief organizations Compassion International, WorldVision, Food for the Hungry and Feed The Children.

Today, as the RIAA’s best-selling female comedian, Pierce continues to bring the laughs with her unique blend of music and comedy.

To order by phone, call the Box Office at 724-836-8000
Ticket sales are ﬁnal; no refunds or exchanges unless the show is cancelled. In the event of a cancellation or postponement, certain service and historic preservation charges are not refundable.